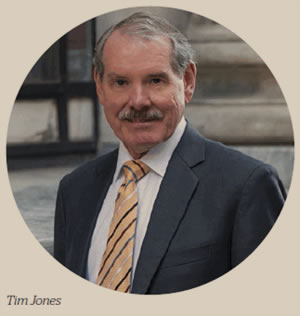 “To be candid, it was pretty accidental,” says Tim Jones, in response to a query about why he decided to study law.

“I came here from the UK after completing my A levels. I had done English, History and British Constitutional Law – I was never going to be an accountant,” he recalls. “My parents were stationed in Fiji, so it seemed logical to go to university somewhere in the region. As it happened, I was offered a place at three New Zealand universities. A good friend from Fiji was coming to Auckland to do accounting, so I came too and studied law, and have been here ever since.”

Attending Auckland Law School was also fortuitous in that he met his future wife, Karen, there – she is now a part-time consultant at the Auckland High Court Library, having worked there (apart from a few breaks when the children were young) for 38 years.

In 1975, after graduating, Tim Jones took a job as a search clerk at Simpson Grierson, before moving to Glaister Ennor, where he remained from 1980 until April this year. Right from the beginning, it was conveyancing work that he loved, and his practice “blossomed from there”. He became a partner in 1983 and built up a top-notch team around him, coming to be regarded as an expert in property law and development throughout the legal fraternity and real estate business world.

Over the course of his career, Tim Jones has been an active member of ADLS, where he has served on a number of Committees. Starting out on the CLE Committee, he went on to anchor the ADLS Documents & Precedents Committee over the course of many years, where he was one of the key people behind the drafting of the ADLS/REINZ Agreement for Sale and Purchase of Real Estate, used throughout New Zealand. He has also been involved with NZLS, latterly serving as Auckland Vice-President, and sat on the Auckland Council for a number of years in the 1990s.

After over 40 years in practice, 37 of which were at the one firm, most people would have felt justified in retiring and enjoying a quieter life. However, that did not feel right for Tim Jones (not yet anyway), so instead he has moved to the bar. He is now practising as a specialist property and land law barrister – advising on a broad range of property and land law matters, such as land development, subdivisions, unit titles, bodies corporate, disputes over easements and the like.

“I was going to retire and just walk away, but then I realised that I still had a lot to offer when it came to advising people who need help with property transactions and disputes,” he reflects.

He hopes his in-depth experience and reputation of having worked on so many of ADLS’ forms and agreements over the years will be of assistance to other lawyers and barristers and notes that Glaister Ennor will be maintaining a close relationship with him and instructing him on specialist property law matters as required. However, those with run-of-the-mill matters needn’t apply – he sees his value-add lying in more complex, out-of-the-ordinary transactions and litigation.

“I’ll be taking on anything but the straight-line stuff – anything a bit curly that I might have seen or encountered before in my years of practice. People often say to me, ‘Well, you know this area inside out, can you provide us with a second opinion on this matter?’ That has led now to a lot of instructions both from former clients and other barristers – it’s enough to keep me reasonably busy, I certainly haven’t found myself twiddling my thumbs.”

In addition, over the past few years, he has found himself in increasing demand to provide expert opinions, and expert evidence and determinations, and anticipates that this will form a large chunk of his work going forward.

He confesses to having found the barristerial life a bit solitary at first but says that he is looking forward to a continued involvement with ADLS as a way of connecting with others and staying in the loop with legal developments.

“One of the things that’s really helped me in all my years of practice has been serving on ADLS Committees. You learn from and keep in contact with other practitioners and, doing the kind of work the Committees do, it helps you stay at the cutting edge of law and practice.

“I always tell young lawyers that the best thing they can do for themselves in terms of their professional development is to get themselves on a Committee – it keeps you on the front line. Lawyers who aren’t involved with that kind of a group do themselves no justice.

“The Documents & Precedents Committee has been wonderful in that it is responsible for all sorts of different kinds of agreements. For example, we’ve constantly had to revise the core terms of the Agreement for Sale and Purchase of Real Estate, and the way in which they’ve been accepted and used has been proof of their value – it’s a wonderful legacy to be able to leave.

“I’ve also been approached to join a subgroup of the NZBA made up of commercial barristers, so I’m looking forward to being involved with that.”

Mr Jones notes that he has been privileged to see many changes during his time in practice, as the law and methods of practising have each evolved.

“Conveyancing has changed a lot through the years. We started with a more old-fashioned, ‘analogue’ way of doing things, with a lot of ‘mum & dad conveyancing work’, and have moved to more modern methods over time, as lawyers have embraced technology such as same-day clear payments, e-banking, and even emails!

“One thing we almost take for granted nowadays is the excellent ADLS WebForms package of documents and precedents. Initially known as ‘Legal Forms’, the package was really innovative at the time and continues to be so through the introduction of the ADLS Digital Signing Service.

“Something else I’m reasonably pleased to have been involved with was the Steering Committee when Landonline was set up, along with Christchurch lawyer Duncan Terris. I visited Ontario in 1998, and again in 2000, to see how we could replicate (or not) the technology and protocols they had used.”

He also has fond memories of the many worthwhile achievements of the Documents & Precedents Committee in the course of his involvement.

“Although they’ve waned in importance over the last 15 to 20 years, defective cross-leases were a really big issue in the 1980s and 90s, and there was a huge debate about how best to draft clauses and documentation to solve the problems about that.

“Another highlight was revising the mortgage form with involvement from (the now) Sir Peter Blanchard and Barry Preddle (formerly of McElroy Duncan & Preddle), among others. Despite only having partial sight (due to an accident) and needing special technology to help him view proposed revisions on screen, amazingly, Barry never seemed to need to see the clauses to remember them and to be able to offer his insights on them.”

Outside of work, and in spite of the queue of clients continuing to seek his expert assistance as a barrister, Mr Jones still finds time to indulge his love of sport, having played soccer and been a keen marathon runner for many years. While lately the running has turned to walking, he still (impressively) manages to walk about two half-marathons a year.

And there may at least be a change of scene in his new working life, if not much of a change of pace. About four years ago, he and his wife decided to build on family land in Northland – you may notice both “Auckland and Waipu Cove” featuring in his email sign-off if you are in touch with him.

“We’ve always had a place to go in Waipu Cove – my wife’s family own farmland there and, about 15 years ago, we bought a section from them with the intention of building someday. I had wanted to be able to spend a few days a week working up there so, with that in mind, we incorporated a proper office with a separate entrance into our house design, meaning I can work just as well up there as I do in Auckland, and even see clients if I need to.

“My family and extended family have always been an important feature of my life, and we are very close. One thing we love about Waipu Cove is the special times we have up there with all of our family – when we gather for special events, such as our annual memorial fishing contest for our son [whom the family sadly lost to cancer in 2008], there are over thirty of us, including children.

Tim Jones anticipates that when the couple decides to retire properly, that’s where you’ll find them, but in the meantime, he’s looking forward to the best of both worlds.